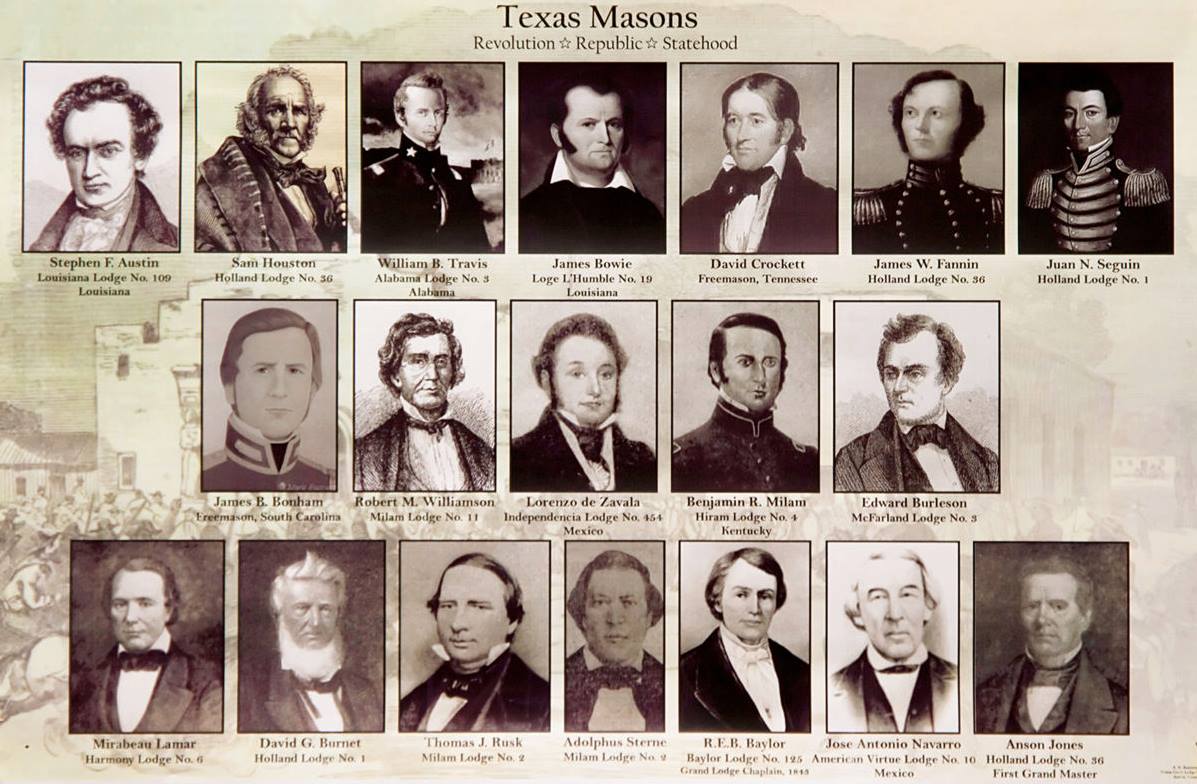 Stephen F. Austin, a member of Louisiana Lodge No. 111 at Ste. Genevieve, Missouri, sought to establish Freemasonry in Texas. Freemasonry was well established among the educated classes of Mexican society. It had been introduced among the aristocracy loyal to the House of Bourbon, and the conservatives had total control over the Order. By 1827, Americans living in Mexico City had introduced the United States York Rite of Freemasonry as a liberal alternative to the established European-style Scottish Rite.

On February 11, 1828, Austin called a meeting of Freemasons at San Felipe to elect officers and to petition the Masonic Grand Lodge in Mexico City for a charter to form a lodge. Austin was elected Worshipful Master of the new lodge. Although the petition reached Matamoros, and was to be forwarded to Mexico City, nothing more was heard of it. By 1828, the ruling faction in Mexico was afraid the liberal elements in Texas might try to gain their independence. Fully aware of the political philosophies of American Freemasons, the Mexican government outlawed Freemasonry on October 25, 1828. In 1829, Austin called another meeting, where it was decided that it was “impolitic and imprudent, at this time, to form Masonic lodges in Texas.”

While serving in the United States House of Representatives, Crockett became a Freemason. He entrusted his masonic apron to the Weakly Lodge in Tennessee before leaving for Texas, and it still survives today.

The last President of the Republic of Texas was a member and Past Master of the Masonic Harmony Lodge #52 of Philadelphia. He was a Past Grand of Independent Order of Odd Fellows Washington Lodge no.2 and Philadelphia Lodge no.13 in Pennsylvania and a Past Grand Master of the Grand Lodge of Pennsylvania.  Just a few months before the Texas Revolution, on March 1, 1835, Jones met with four other Masons at Brazoria and petitioned the Grand Master of Louisiana for a dispensation and a charter to form the first Masonic lodge in Texas. In December, when the lodge was set to labor, Jones was elected its first Master. The charter for Holland Lodge No. 36 arrived during the final days of the revolution, and Jones carried it in his saddlebags during the decisive Battle of San Jacinto on April 21, 1836. At the formation of the Grand Lodge of the Republic of Texas in December 1837, he was elected its first Grand Master. He also became the first Grand Master of the Independent Order of Odd Fellows in Texas.

Zavala and his friends secretly organized the first Masonic Lodge in Yucatán, the Reunión a la Virtud lodge No. 9. The lodge received its charter from the Louisiana Grand Lodge in 1817. It was Zavala’s relationship with his fellow masonic brothers and to other lodges that allowed him to gather many political connections prior to Mexico’s Independence.  Zavala was one of the key people that helped establish the York Rite Masonry in Mexico in 1826 as an alternative to the older, well established Scottish rite (Escosese). That same year the Grand Lodge of New York issued charters to five Masonic Lodges in Mexico City. These five lodges became the nucleus of the movement that favored decentralization of leadership. Zavala became the Charter Master of Independencia Lodge No. 454. He kept his position until his exile in 1830.  He is listed as a “Masonic Hero” by the Grand Lodge of Texas. Some sources state that Zavala was disgraced for revealing ritual secrets.

Ross was an active freemason having become a master mason at the lodge his father helped create in 1851, Waco Masonic Lodge #92, and as a member there, Ross was involved with the development of the new city with the same name.

John Joseph Kennedy (1813–1880) was a Scotch-Irish American lawyer and sheriff of Harrison County, Texas that helped end the Regulator-Moderator War in East Texas. He was an artillery officer in the United States Army and a cavalry captain for the Confederate States of America during the American Civil War. Kennedy was also a Freemason and member of Marshall Lodge #22.

Baylor was one of the first officers of the Texas Baptist Educational Society and, in 1844, along with Reverend William Tryon and Reverend James Huckins, sent a petition to the Congress of the Republic of Texas asking the nation to charter a Baptist university. In response to this petition, The Republic of Texas produced an Act of Congress that was signed on February 1, 1845, by Anson Jones, providing the charter that yielded Baylor University.  Baylor was a Mason from 1825 until his death. He never married and had no children, although he was close to his nephew John Baylor.

Audie Leon Murphy (20 June 1925 – 28 May 1971) was one of the most decorated American combat soldiers of World War II, receiving every military combat award for valor available from the U.S. Army, as well as French and Belgian awards for heroism. Murphy received the Medal of Honor for valor demonstrated at the age of 19 for single-handedly holding off an entire company of German soldiers for an hour at the Colmar Pocket in France in January 1945, then leading a successful counterattack while wounded and out of ammunition. You can read here about his involvement in Freemasony.

Gene Autry died of lymphoma on October 2, 1998, three days after his 91st birthday at his home in Studio City, California. He was buried at the Forest Lawn, Hollywood Hills Cemetery in Los Angeles. His epitaph read, “America’s Favorite Cowboy … American Hero, Philanthropist, Patriot and Veteran, Movie Star, Singer, Composer, Baseball Fan and Owner, 33rd Degree Mason, Media Entrepreneur, Loving Husband, Gentleman”.  In 1932, Autry married Ina May Spivey, the niece of Jimmy Long. After she died in 1980, he married Jacqueline Ellam, who had been his banker, in 1981. He had no children by either marriage. Autry was raised into Freemasonry in 1927 at Catoosa Lodge No. 185, Catoosa Oklahoma. He later became a 33rd degree Master Mason, as recorded on his headstone.