Audie L. Murphy was born on June 20, 1924 near Farmersville, TX. He ended school at
the fifth grade to help his family financially. After the attack on Pearl Harbor he want to
enlist at age 17, but standing only 5’5” tall and weighing a mere 110 lbs he was turned
down. Over the next six months he ate as much food as he could get his hands on and
exercised regularly. Murphy was finally accepted into the Army on June 30, 1942. 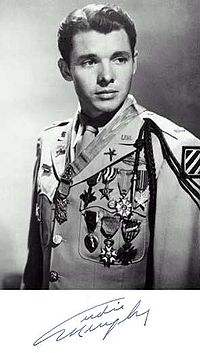 He did well in basic training scoring such high marks in attitude and leadership that he
shipped out as a corporal in February, 1943 in company B, 1st Battalion, 15th Infantry
Regiment, 3rd Infantry Division. For the 28 months he would spend with Company B
he would be promoted to its commander and earn every combat decoration the army
bestowed, two of them twice.

Murphy’s first combat experience came on Sicily in 1943 when he killed 2 Italian
officers escaping on horses. His platoon leader was concerned with Murphy’s hard
determination while killing the enemy, even when fleeing. When asked why he shot
those fleeing officers Murphy replied, “That’s our job.”

Murphy was hospitalized with malaria for several weeks following the Sicilian campaign,
but he rejoined his unit in Salerno, Italy. Company B with thousands of other Allied
troops fought their way up the Italian boot across mountainous terrain where the war was reduced to a grinding attrition, slogging forward and rooting out the enemy yard by yard.

As horrible as the mountain fighting was, the amphibious assault at Anzio was worse,
where mere survival was a victory. Many of Murphy’s pals died at Anzio, and years
later he would recall, “I began feeling like a fugitive from the law of averages.” Murphy
survived Anzio as one of the few men in his unit not to receive a Purple Heart. After
the fall of Rome, the 3rd Division was pulled from the front lines to rest and refit for the
invasion of southern France which took place on August 15, 1944. On that day Murphy
earned his first decoration.

Company B landed on the southern French coast east of Ramatoulle. During an attack on enemy pill boxes behind the primary assault beaches Murphy’s best friend was killed by a sniper when he rose from his foxhole to accept the surrender of a German soldier.  Furious at this treachery, Murphy attacked a German machine gun nest by himself. He wiped out the machine gun crew and used the heavy German weapon to advance up the hill, firing from the hip at anything that moved. In avenging his friend’s death, Murphy killed at least 5 enemy soldiers, wounded two, and captured five more. Though he received the Distinguished Service Cross for this action it did not make up for the loss of his friend. “I won the D.S.C., but all he got was death,” he would recall later.

On September 15, 1944, while fighting into central France, a German shell exploded near
Murphy killing two of his friends and sending Murphy to the hospital, but in less than

a week he was back with Co. B to fight the Germans. Murphy earned Silver Stars for
his bravery in two different engagements, on October 2 and October 5, 1944. After his
second Silver Star he earned a battlefield promotion to Second Lieutenant. His superior
officers had recommended Murphy’s promotion to officer’s rank several times before,
but he had always turned them down. He believed his lack of education would handicap
him with the administrative duties of an officer. But even more importantly, Army
policy at the time was to rotate a newly commissioned officer out of his original unit, and
Murphy did not want to leave his pals in Co. B. When his battalion commander received
a waiver on that policy and assured Murphy he would get help with the paperwork, he
accepted his promotion on October 14, 1944.

Only 12 days later, Murphy was shot in the right hip. Before the immense pain
immobilized him, Murphy shot his attacker. He then spent two month recuperating in
a hospital before rejoining his unit for offensive action in to the city of Holtzwihr on
January 14, 1945. It was in this action that Murphy would earn our nation’s highest
military honor.

January was a rough month for Company B – the casualties mounted, and temperatures
never went above freezing and nights were below zero. On January 25, 1945 Murphy
and his company were dug in near the Ill River when shrapnel from a German mortar
peppered Murphy’s leg. He refused to go to an aide station and bandaged his leg
knowing the company needed every man to hold their position. He was right. The
company commander was wounded the next day, and Murphy assumed command. At
full strength an American Army infantry company consisted of some 250 officers
and men. On January 26, 1945, Murphy’s Company B had only 18 men fit for duty, and
he was the only officer. His orders were to hold his position until reinforcements arrived.
Two tank destroyers supported the 19 soldiers of Company B.

About 2:00 pm on January 26, six German Tiger tanks supported by over 200 infantry
headed toward Murphy’s position. As Murphy’s men prepared to fight off the attackers
one of the tank destroyers slid into a ditch, and its crew fled to the rear. Murphy called
in an artillery barrage to halt the German advance. Just as American shells started to fall
on the enemy, one of the Tiger tanks hit the remaining American tank destroyer killing
most of its crew and setting it on fire. The artillery barrage had killed some German
infantry but the Tigers kept coming forward. Without armor support, Murphy’s 18 men
didn’t have much of a chance. He ordered his last sergeant to get the men to safety while
he would remain with the radio directing the artillery fire. Reluctantly, the sergeant the
other men left their commander to face the Germans alone.

Murphy fired his carbine at the foot soldiers while adjusting the artillery fire to knock out
the tanks. When his ammunition was exhausted, he dragged the radio over to the burning
tank destroyer and shot its serviceable .50 caliber machine gun. He directed the fire all
the way to just 50 yards from his position, then finally ordering a drop on his position
and then he hunkered down for what little shelter he could find. Finally, the Germans
retreated; Audie Murphy had single-handedly turned back an armored task force. The
next day, Murphy led his men with other American units to capture Holtzwihr.

Murphy was presented with the Congressional Medal of Honor on June 2, 1945. Murphy
returned to the United States on June 13 having been awarded the Medal of Honor, the
Distinguished Service Cross, two Silver Stars, the Legion of Merit, three Purple Hearts,
two Bronze stars, and 23 other unit, campaign, and foreign decorations all before his 21st
birthday.

In 1955, Audie Murphy became interested in Freemasonry. Encouraged by his close friend, Texas theater owner Skipper Cherry, Audie petitioned and joined the Masonic Order in California. Later he returned to Texas to conduct his 32 degree work where he joined the Shriners. Audie remained active in various masonic events and was a member of good standing at the time of his death.

Audie received his first degree in Masonry when he was regularly initiated, February 14, 1955 through the North Hollywood (California) Lodge No. 542 F & AM (Free and Accepted Masons). He was passed to the 2d degree of Fellowcraft on April 4, 1955. On June 27, 1955, he was raised to the 3d degree of a Master Mason.

Audie took his 32d degree work (degrees 4 through 32) at the Scottish Rite Temple in Dallas on November 11-14, 1957 according to records located at this temple. After receiving his 32d degree, Audie was elected vice president of the Thomas B. Hunter Memorial Class of the Dallas Scottish Rite.

Audie became a Shriner (Hella Temple, Dallas) on November 15, 1957.
Audie was also decorated a Knight Commander of the Court of Honor (KCCH) on December 11, 1965.Audie was made a “Master of the Royal Secret” in the Valley of Dallas, Orient of Texas, on November 14, 1965.

Murphy was an active mason for most the rest of his life.  He died on May 28, 1971, Murphy was killed when the private plane in which he was a passenger crashed.  At the time of his death, he had been recently awarded of honorary 33rd degree.  His white cap was presented to his widow, Pamela Murphy.

His medals and awards are on display at the Dallas Scottish Rite Temple Museum and the China Room of the 15th Infantry Regiment (Kelley Hill, Fort Benning, Georgia). 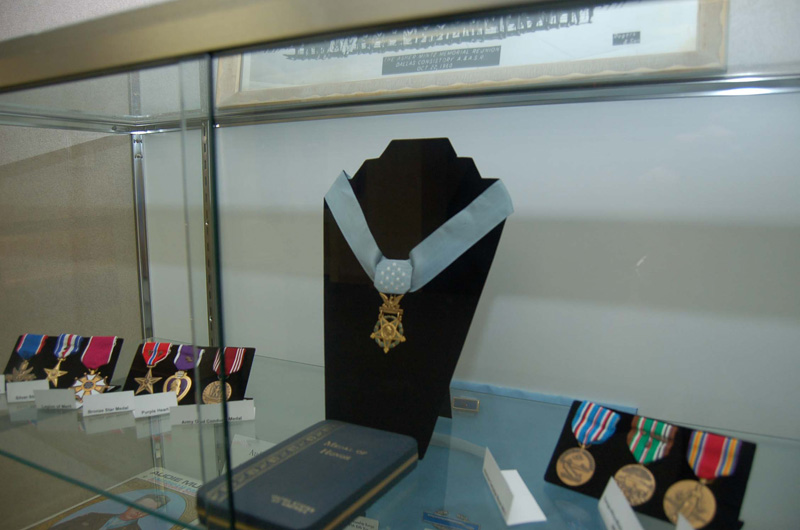