Anson Jones was the first Grand Master of Texas and the Last President of Texas, who played a significant role in founding Masonry in Texas, as well as the early formation of the Texas Republic.  Below is a first hand account of his recollection of both of these historic events, as recorded by the Grand Lodge of Texas. 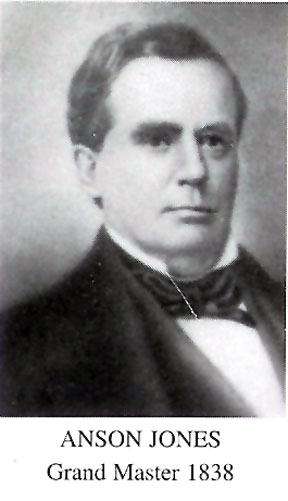 “As I took an active part in laying the first foundation of Freemasonry in this country, originated, and was personally present at, the first meeting ever held here, and cognizant of the earliest steps taken for the organization of a lodge, I place upon record the following facts, which may be of interest perhaps to the fraternity hereafter and would otherwise be lost, as I am now the only living of the five brethren who organized Holland Lodge.

“In the winter of 1834-5, five Master Masons, who bad made themselves known to–each other, consulted among themselves, and, after much deliberation, resolved to take measures to establish a lodge of their order in Texas. This resolution was not formed without a full appreciation of its consequences to the individuals concerned. Every movement in Texas at that time was watched with jealousy and distrust by the Mexican government and already had its spies and emissaries denounced some of our best citizens as factionists and disaffected persons; already were the future intended victims of despotic power being selected. It was well known that Freemasonry was particularly odious to the Catholic priesthood, whose influence in the country at that time was all-powerful. The, dangers, therefore, attendant upon an organization of Masons, at this time,, which was trying upon men’s souls,’ were neither few nor unimportant. But zeal for the beloved institution, a belief that it would be beneficial at this period when society seemed especially to need fraternal bonds to unite them together predominated; all fears of personal consequences were thrown aside, and the resolution to establish a lodge, as above mentioned, was adopted. The five brethren were John H. Wharton, Asa Brigham, James A E. Phelps, Alexander Russell and Anson: Jones, and they appointed. a time and place of meeting to concert measures to carry their resolution into effect. In the meantime another Master Mason came into their plans—Brother John P. Caldwell.

“The place of meeting was hack of the town, of Brazoria, near the place known as General John Austin ‘s, in a little grove of wild peach or laurel, ad which had been selected as a family burying ground by that distinguished soldier and citizen. The spot was secluded and out of the way of cowans and eavesdroppers, Ind they felt they were alone. Here, and under such circumstances, at 10 o’clock in the morning of a day in March„ 1835, was held the first formal Masonic meeting in Texas as connected with the establishment and continuance of Masonry in this country. The six brethren I have mentioned were all present there, and it was concluded to apply to the grand lodge of Louisiana, for a dispensation to form an open lodge; to be called Holland Lodge, in honor of the then Most Wonderful Grand Master of that body, J H Holland. The funds. were raised by contribution to defray the expenses of which each contributed as he felt willing and able. A petition was in due time drawn up and signed by them, which was forwarded to New Orleans, having been previously signed by another Master Mason, Brother W.D. C. Hall, and perhaps one or two more; but of this I do not recollect.

“The officers named in the petition were: For worshipful master, Anson ,Tones; senior warden, Asa Brigham; junior warden, J. P. Coldwell, who filled those offices respectively until the close of 1837. The dispensation was granted. and after some delay, in these brethren, and Holland Lodge No..36, under dispensation, was instituted and opened at Brazoria, on the 27th of December, 1835. Brother Phelps was chosen treasurer, and M. C. Patton secretary. The other officers I do not recall. The lodge held its meetings at Brazoria, in the second story of the old courthouse, which room was afterwards occupied by St. John’s Lodge No. 5. About this time the difficulties with Mexico broke out into open hostilities, and our work was very much retarded by that circumstance, and by the members having to be absent in the service of the country. Still there were a few others from time to time introduced into the order, either by receiving the degrees or by affiliation. The lodge struggled until February, 1836, when I presided over its last meeting at Brazoria. I well recollect the night and the fact that Brother Fannin, who one month after became so celebrated for his misfortune and those of his unfortunate party at Goliad, acted as senior deacon. It seemed indeed that the gloom which prevailed in the lodge that night was a foreshadowing of its and their unhappy fate, which was to soon to overtake both.

“In March Brzoria was abandoned. Urrea soon after took possession of the place at the head of the detachment of the Mexican army, and the records, books, jewels and everything belonging to the lodge, were utterly destroyed by them, and our members were scattered in every direction. Brother Wharton, Phelps and myself joined the Texas troops on the Colorado, about the 18th of March. In. the meantime, the Grand Lodge of Louisiana had issued a charter for Holland Lode No. 36 and it was brought over to Texas by Brother John A. Allen. This, /together with some letters from the grand secretary, was handed to me by Brother Allen, on the prairie between Grece ‘s and San Jacinto, while we were on the march, and carried by me in my saddlebags to the encampment of the army on Buffalo Bayou, at Lynchburg. Had we been beaten here Santa Anna would have captured the charter of Holland Lodge at San Jacinto, as Urrea had the dispensation for it at Brazoria. Such an event however, was impossible. The charter and papers were taken safely to Brazoria; but, as the members had been lessened in numbers by death, or scattered in the army and elsewhere in the service of the country no attempt was made to revive the work of the lodge at that place. “In October, 1837, however, it was reopened by myself and others, at the city of Houston, having been in existence about two years.

“Holland Lodge No. 36 was the only one established in Texas prior to the revolution which separated her from Mexico.

“Such is a brief but faithful sketch of the first establishment of Freemasonry in Texas. It was founded like our political institutions, amid the stern, concomitants of adversity and war, but its foundations were laid broad and deep; and upon them has been raised a superstructure of strength and beauty symmetrical in its proportions and vast in its dimensions, which I trust will rise usque ad astra and continue as a beacon to guide and cheer worthy Masons on their journey of life, and against which the wasting storms of time shall beat in vain, and the restless waves of persecution cast themselves to destruction in angry Foam; while the presiding genius of the institution from its lofty walls shall ever continue to exclaim in emphatic tones, to be heard by all—east, west, north and south.