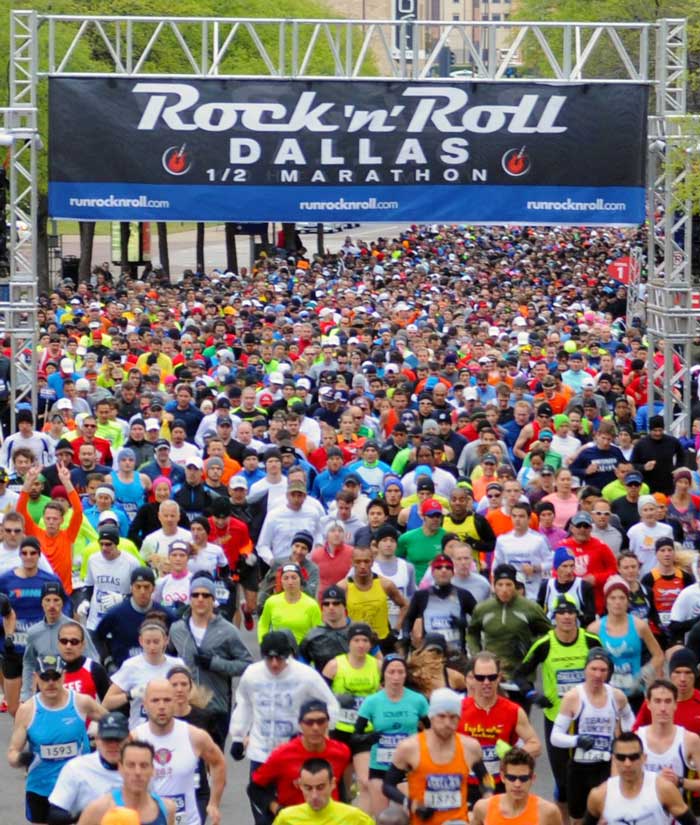 This year was the third year for Hillcrest Lodge to help out with the Dallas Rock & Roll Marathon and first year to run a water station.  Being that we did not know we were going to be counted on to be totally in charge of the water station until about 24 hours before the race started, I would say we did pretty good.  It was hectic but the leadership in Hillcrest Lodge’s men brought it together for success.

It was a very cold morning in March when many of the Masons of Hillcrest Lodge showed up at 6am in the morning to start setting up waterstation number three.  Normally we just volunteer and a bunch of our masons show up and help out in any way they can.  This year was a little bit different.  About 24 hours before the race began, our Worshipful Master Ken Knotts got a phone call informing him that the team that was to run water station number 3 had to back out at the last minute.  The question that followed immediately was could we take it over.

Ken, knowing that we had a few waterstation veterans on our team decided that we could handle the task at hand, and sent out an “all hands on deck” email blast.  We had quite a few of our members turn out the next morning but getting enough members together in so short a time to fulfill an entire water station team was a bit tough.

While the Dallas Masons of Hillcrest Lodge were a little short to fill an entire water station themselves (which normally consists of 30 or so individuals) we were aided by some members of the Scottish Rite club of the University of Dallas.  Along with having a few motivated masons this was enough to succeed.

In the short few hours that passed, Hillcrest Masons were able to fill about 20 tables of water cups, which equated to approximately 5,000 cups of water.  I don’t know if you have ever tried to fill 5,000 cups of water, in the cold and short handed, but let me tell you it is challenging.  Ken showed great leadership in strategizing everyones roles and ensuring that everyone always had work to do and was doing it in the most efficient process possible.  Many of the brethren who had volunteered for this before offered their tactics to others who were less experienced.

While the cold weather seemed to be against us while we were filling up the cups of water, it actually turned out to be working in our favor the whole time.  5,000 cups might sound like plenty, but when you have over 10,000 people running the Dallas Rock and Roll marathon, it can be consumed quick.  Luckily the same weather that numbed our fingers also numbed the runners thirst, and we actually ended up pouring more water than was needed.