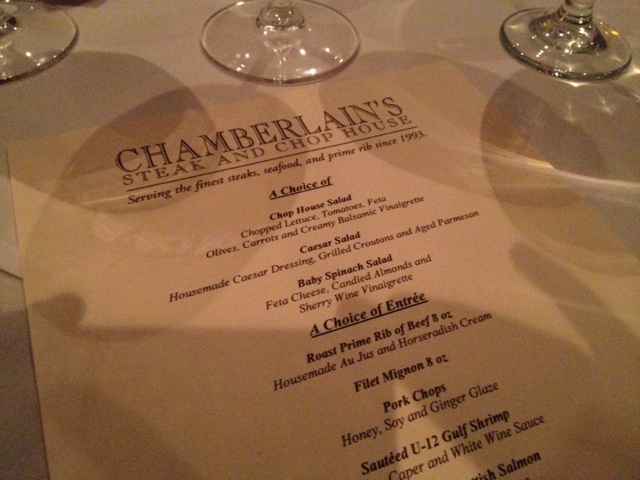 On Thursday May 15th 2014 the brethren of Hillcrest Masonic Lodge came together in Fellowship for refreshment and education.  We met at Chamberlain’s Steak House for an evening of wonderful food and the sharing of knowledge.

For the Purpose of masonic knowledge and education the Officers of Hillcrest ceremonially reenacted the opening of a masonic festive board.  There has been some controversy on this topic recently, as the Grand Lodge outlawed the performance of a “Table Lodge” this past year at the annual congress, although after detailed questioning, we verified that the ability for a masonic lodge to conduct themselves at a festive board was within the current masonic law.

To help share the knowledge and easy tensions of those trying to figure out for themselves what can and cannot be done within the Jurisdiction of Texas in regards to table lodges and festive boards, I will try and explain…

A lodge is a place where masons organize or meet with the holy bible, square, compass and a charter from their respective Grand Jurisdiction authorizing to meet and work as such.

A table lodge is a lodge that is gathered as stated above, for the purpose of an official meeting and generally held in a lodge room around a food table, or elsewhere if given a proper permit from the Grand Master to move the charter for an evening to work elsewhere.  This is what has been outlawed in the Grand Jurisdiction of Texas this year, however this was a tradition way of holding lodges during the formation of early America as many of the earliest American and Continental Lodges met above bars or taverns around a table.

A festive board is something that may have a similar look and feel to a table lodge, but is completely different.

A festive board is an occasion for masons to get together around a table or banquet for the purpose of socializing, sharing in fellowship, and masonic education.  A festive board is not an official meeting of the lodge, and in Texas can not be held on the premises of the lodge building.  There are generally toasts, a guest speaker with a masonic intended lecture, and in some cases, the observance of some masonic work that has long been retired.  The work is for education purpose only and is not a registered or official ceremony recognized by the grand lodge.  It is instead used as inspiration for masons to learn more about their fraternities deep, rich history.

You should note that in a festive board, the charter of the lodge is not present, the private dining room is not actuality tiled, and the board in no way represents the lodge actually opened for the purpose of business.  It is a harmless exercise of masonic education focused on food and fellowship.  No lodge voting or any other business can actually be discussed here.

So with that being cleared up, the Brethren of Hillcrest Masonic Lodge had a wonderful evening.  We had booked out a room for 18 men, which sold out in a matter of Days!  Many of the brethren started the festivities with a few drinks during a social hour and after the food order was placed, the door was closed and we went through a ceremonial reenacting of a festive board opening. 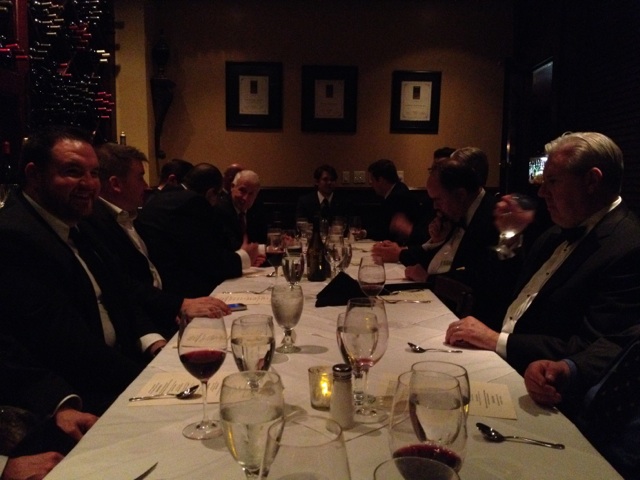 The three course dinner was enjoyed by all and after the dessert course, we opened up the floor for our masonic lecture. 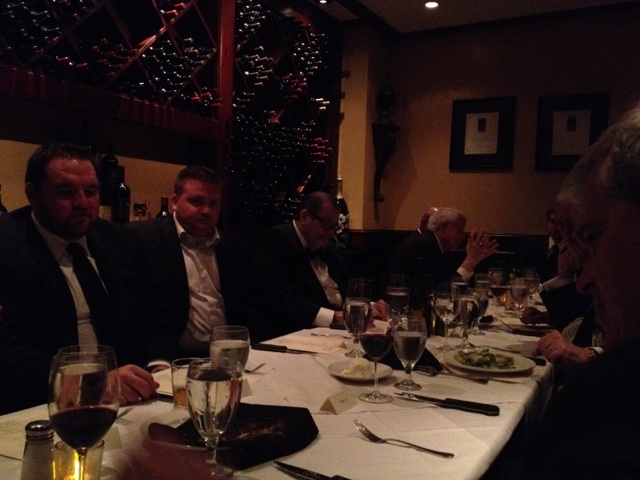 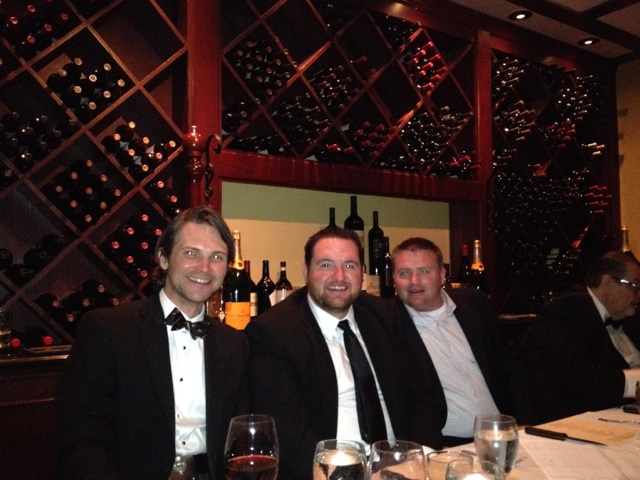 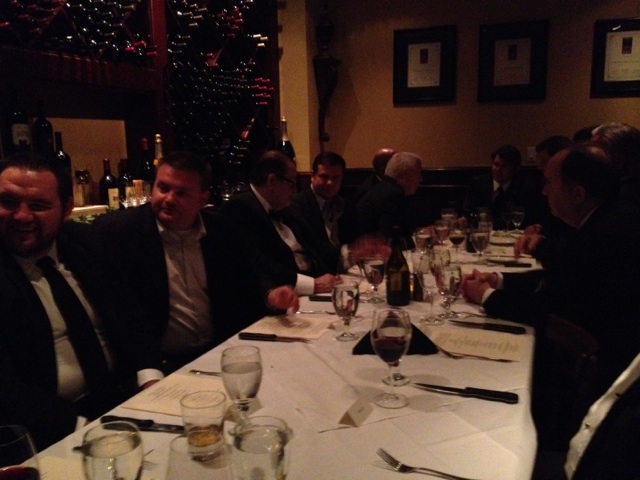 The Festive Board Lecture: The History of the Two Philosophies of Freemasonry – The Ancients & The Moderns

The Lecture was given by Brother Pete Normand from St. Alban’s Lodge in College Station, who is the current siting President of the Masonic Restoration Foundation, a Past Master and Fellow of the Texas Lodge of Research, and a Founder, Board Member & former Editor of the Scottish Rite Research Society.

Brother Normand’s lecture was a very intriguing view of masonic history and tradition within differing philosophies of the craft, and we have provided a paraphrased outline of it below for your enjoyment…

The “discussion” that has caused the controversy of table lodges and festive boards is part of an ongoing discussion between two different factions, or schools of thought, within grand lodge, and which have been a part of Freemasonry since the early 1700s. These two schools of thought are usually called “The Ancients” and “The Moderns.”

The Ancients, as their name implies, represent the older of the two schools. Their philosophy of Freemasonry was handed down from the more esoteric and mystical approach to Freemasonry as practiced by the Scottish Freemasons of the 1600s.

However, in the early 1700s, there was a major paradigm shift that took place in England. It was this paradigm shift that gave rise to the two philosophical factions. In 1714, with the death of Queen Anne, the last of the Stuart monarchs, George I of the German House of Hanover succeeded her to the throne. Of course, this led to the Scottish Rebellion of 1715, supported by the Stuart Royal House, known as “Jacobites.”

The paradigm shift that took place in England helped to define the two opposing philosophies found within Freemasonry today. The older faction had always been the more spiritual, more esoterically-inclined faction. They loved the more elaborate colorful ritual embellishments, eventually embracing the high degrees. This faction in Freemasonry has been called “Franco-Scottish Freemasonry,” and it brings to mind the “auld alliance” between Scotland and France, because of their mutual adversary, England.

This more elaborate, decorous, spiritual, deeply philosophical type of Freemasonry is the first thing that comes to mind when you think of “Franco-Scottish Freemasonry.”

On the other hand, in the early 1700s, with the rise of the House of Hanover and its supporting Whig Party, upper-class London gentlemen wanted to distance themselves from anything that seemed the least bit “esoteric” or spiritual. No proper English gentleman wanted any part of the more elaborate and mystical nature of “Ancient” Freemasonry.

And so, the two philosophies took their different paths.

During the period immediately following the Rebellion of 1715, the loyalty of anything Scottish was somewhat suspect. This was a problem for Freemasonry in London during the second decade of the 18th century, as Freemasonry was, essentially, still considered a Scottish institution. Not only that, it was a Scottish institution that met in secret in the upper rooms over pubs and alehouses, had secret passwords, signs and handshakes, and posted armed guards outside their meetings.

The loyal gentrified members of the four upper-class lodges, full of loyalist Whigs, decided that they needed to do something to distance themselves from the lower-class lodges, full of Jacobite Tories and other hoi-polloi that met across town. The result was that, in June 1717, the four upper-class lodges formed what they called a “grand lodge.” It was, for all intents, an innovation in the body of Freemasonry. In fact, it was the biggest innovation introduced to date.

Once that was done, these upper-class lodges introduced a number of other innovations, and embraced a more streamlined, unembellished form of ritual.

The other lodges across town quickly began to refer to the members of this new “grand lodge” by the derisive term “Moderns.” Which, of course, caused the members of the old unaffiliated lodge to be referred to as “Ancients.” The two terms stuck, and after the Ancients formed their own grand lodge 34 years later, in 1751, the two factions were distinguished more by their very different visions approaches to the way they practiced Freemasonry than by anything else.

In America, the difference between the two is clearly evident in the continental-style degrees of the Scottish Rite, and the English-style degrees of the York Rite. The two factions take different views on just about everything in Freemasonry, including whether or not there is an esoteric or spiritual component to Masonic ritual, to the way lodge meetings should be conducted, to the way lodge dinners should be conducted, to the way you should dress when you attend lodge, etc., etc., etc.

Today, these two philosophical factions are alive and well within every grand lodge in the U.S. The “Moderns” see nothing esoteric, nothing mystical, nothing spiritual in Freemasonry. They work hard to memorize the ritual perfectly, and they prefer a simpler approach to Freemasonry, and see the fraternity as primarily a service-oriented social organization whose primary focus should be on charitable works and service projects in the community. The Moderns are quick to denounce the old traditions of the Craft and embrace newer and more innovative ways of doing things. For example, the Moderns eschew the secrecy of the fraternity, and jump at every opportunity to hold open installations, open meetings, and open houses, where the general public can be shown through the every closet in the temple, and all the mystery and mystique of the fraternity dispelled. They are famous for saying “Freemasonry has no secrets.”

On the other hand, the “Ancients” are primarily focused on the esoteric, mystical, spiritual aspects of the fraternity. The Ancients love the ritual as much as the Moderns do, but they are also interested in the meaning of the ritual, its roots, its evolution and history. As a result, the Ancients are supporters of Masonic education, Masonic libraries, research, etc. The Ancients have never embraced a simpler approach to Freemasonry, preferring the more elaborate ceremonies, and the more traditional modes of practicing Freemasonry. The Ancients are champions of the tradition of secrecy, even to the point of wanting to prohibit photography in tiled meetings of the lodge and/or grand lodge. The Ancients prefer a more formal, solemn, reverent approach to meetings, and do not prefer open installations and meetings, preferring to keep social meetings social, and tiled meetings tiled. The Ancients are not in favor of dumbing down the fraternity, and they are not in favor of the lowest common denominator. They support formal festive board dinners and other such embellishing masonic activities.

After the lecture, we had a brief questions and answers segment and then proceeded to observe the ceremonial closing of the festive board’s expired ritual.

It became obvious that most of our members in attendance were newer, younger masons.  The average age of the Hillcrest Brethren that made up this years festive board was probably no more than 38 – 40 years of age over 18 members. The questions asked seem to reflect that many of the members are concerned for, and interested in a deeper more esoteric form of masonry than what many other lodges can provide.

While we value both views of the craft, and the differences that make up the Fraternity, Hillcrest is proud to offer so many men amongst its ranks that hold high esteem for the philosophies behind the craft and its ceremonies.  We see a lot of men come through our doors looking for admission and we can say without hesitation, that this new and coming generation of Freemasons is looking for that deeper meaning in things.  The coming generation tells us they are coming from a world that has tried to become too sanitary against anything mystic or esoteric, and come to us believing we can provide them with that missing piece.

We are proud at Hillcrest to say yes, we are different than many lodges out there, and yes, we do appreciate the secrets and traditions of Masonry, even those that might have historically been shunned by some as not sanitary enough for the rest of the world.

If you are interested in this, and would like to know more about how to become a Freemason, just follow that link and reach out to us.  We will be glad to have you meet with us, and answer any questions we can.