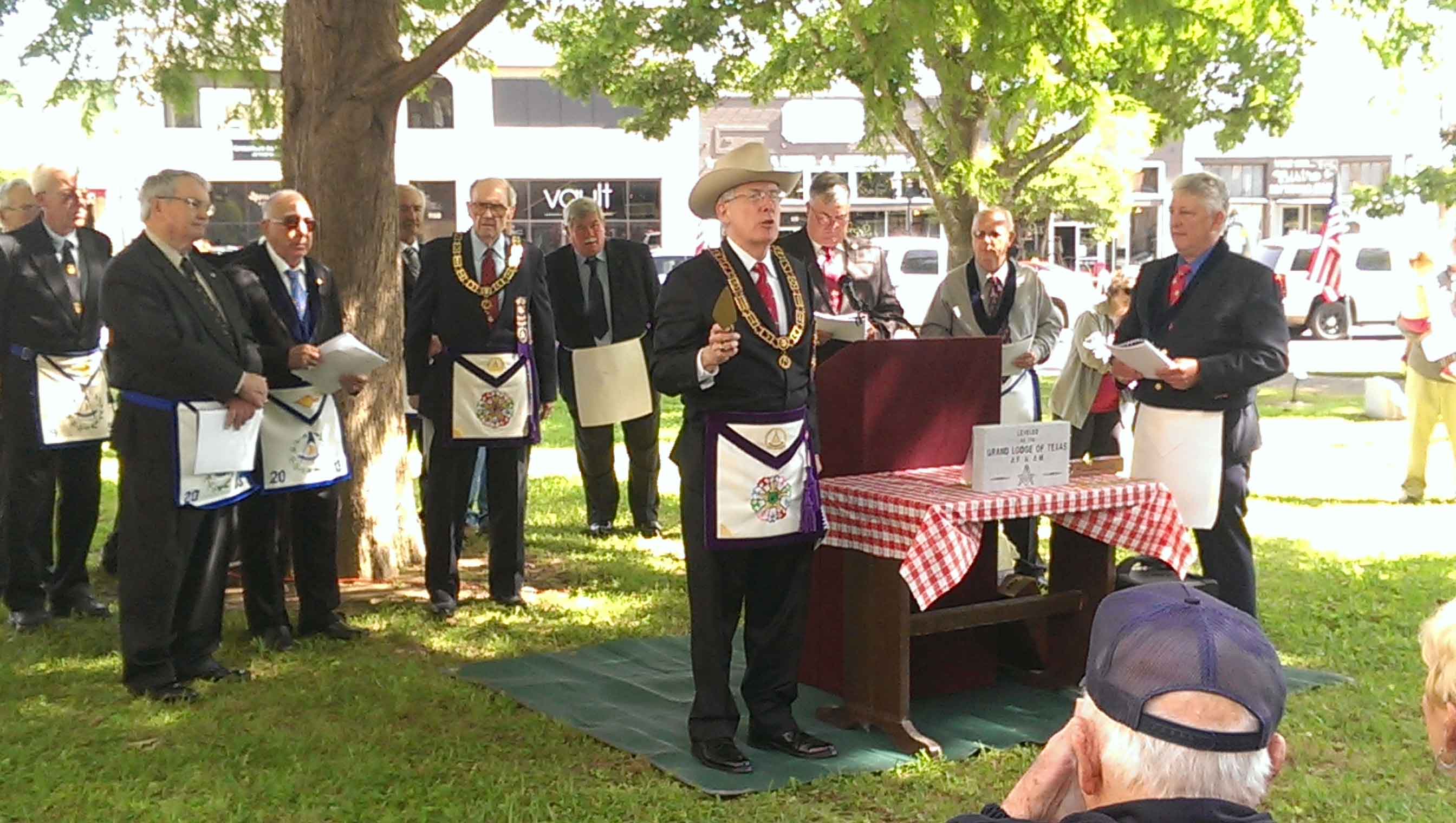 On the Morning of Saturday May 17th Dallas Masons and Past Grand Masters Elmer Murphey and Leonard P. Harvey opened a representation of the Grand Lodge of Texas in Athens Lodge in Athens Texas for the purpose of performing a cornerstone ceremony for the Athens Courthouse. 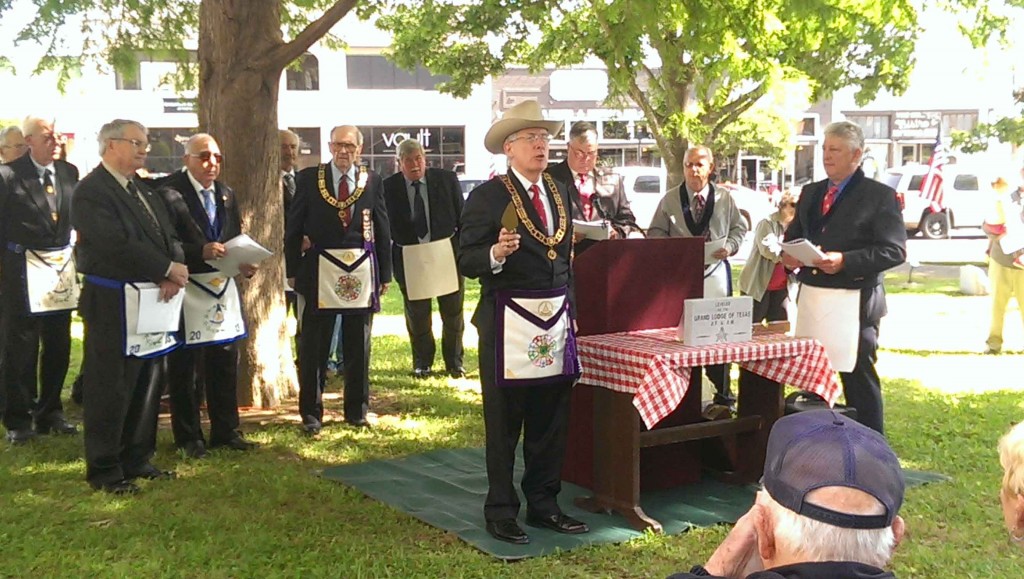 The Athens City Courthouse was having its centennial celebration, and as part of the ceremonies, the Texas Masons were asked to come out and rededicate the cornerstone of the building, like it had been done by the Freemasons 100 years before.  The cornerstone ceremony was conducted at 10am with PGM Elmer Murphey presiding as The Most Worshipful Grand Master pro tem and PGM Leonard Harvey as the Right Worshipful Senior Warden pro tem. 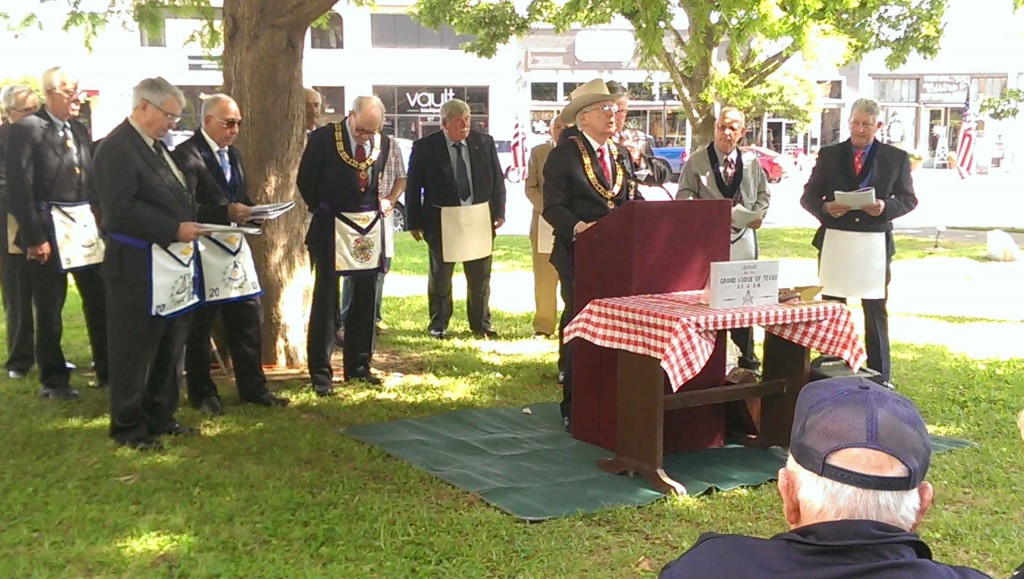 Past Grand Master Murphey Gives a speech on Freemasonry and its historical significance to the communities in Texas and the cornerstone ceremony. 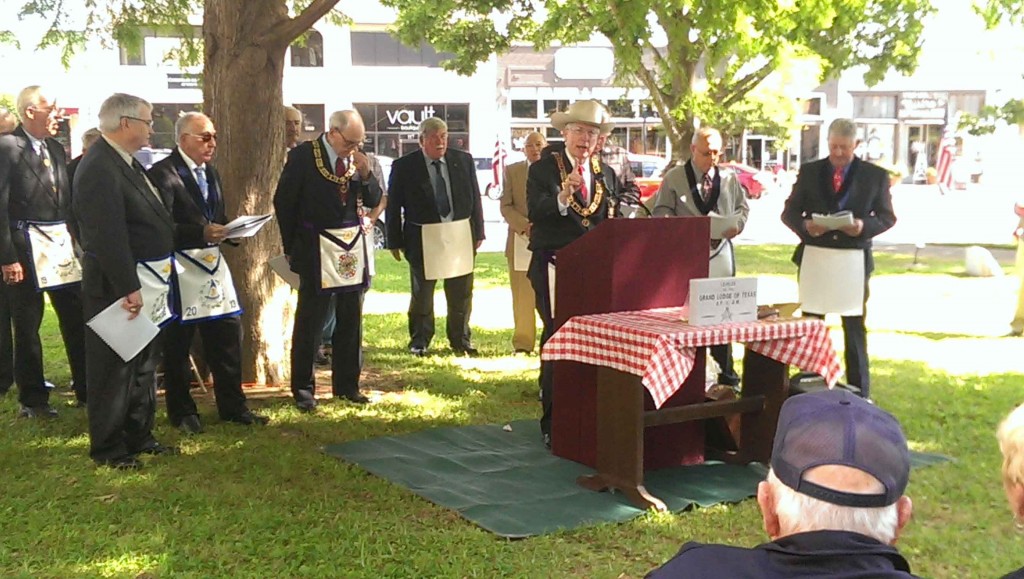 Past Grand Master Murphey applying the golden trowel to the ceremonial cornerstone. 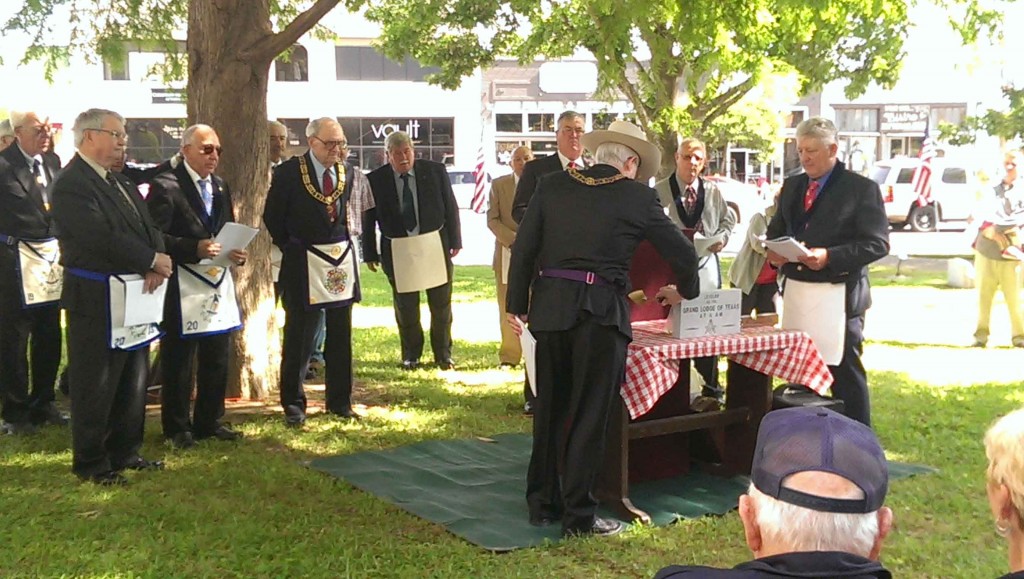 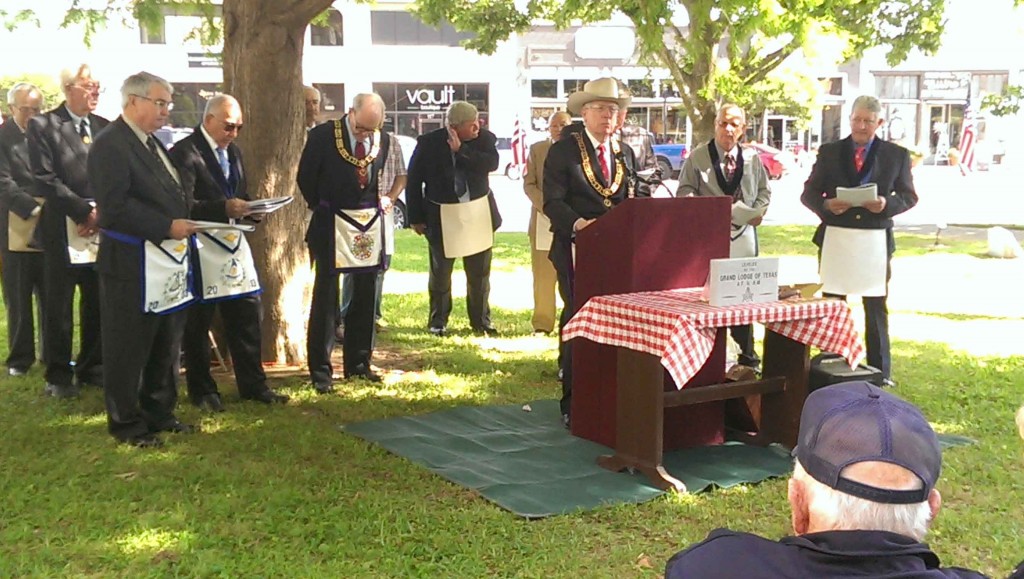 The original Athens Courthouse Cornerstone laid by the Freemasons of Texas 100 years ago. 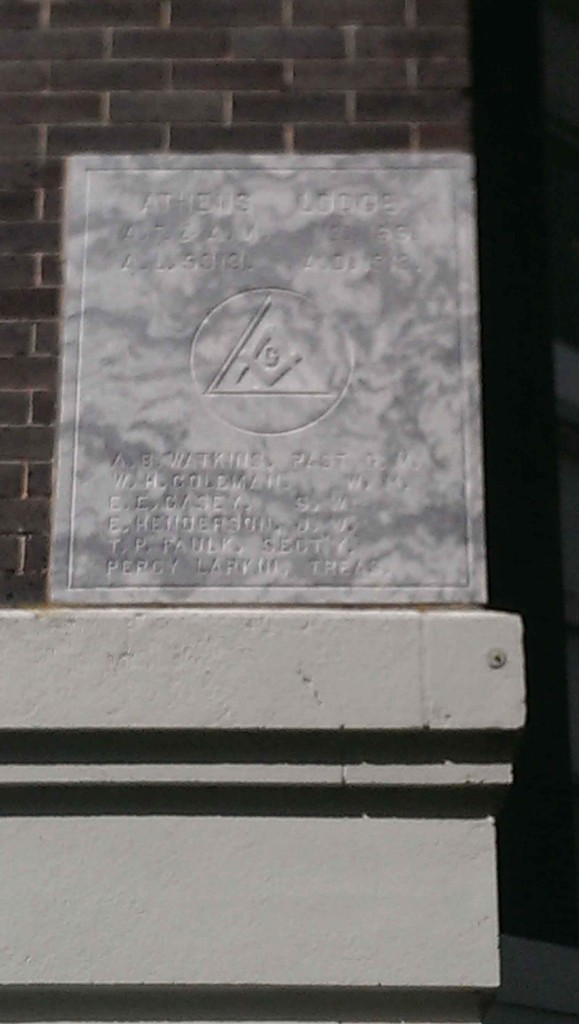 Wikipedia has this to say about the cornerstone …

The cornerstone (or foundation stone) concept is derived from the first stone set in the construction of a masonry foundation, important since all other stones will be set in reference to this stone, thus determining the position of the entire structure.

Over time a cornerstone became a ceremonial masonry stone, or replica, set in a prominent location on the outside of a building, with an inscription on the stone indicating the construction dates of the building and the names of architect, builder and other significant individuals. The rite of laying a cornerstone is an important cultural component of eastern architecture and metaphorically in sacred architecture generally. 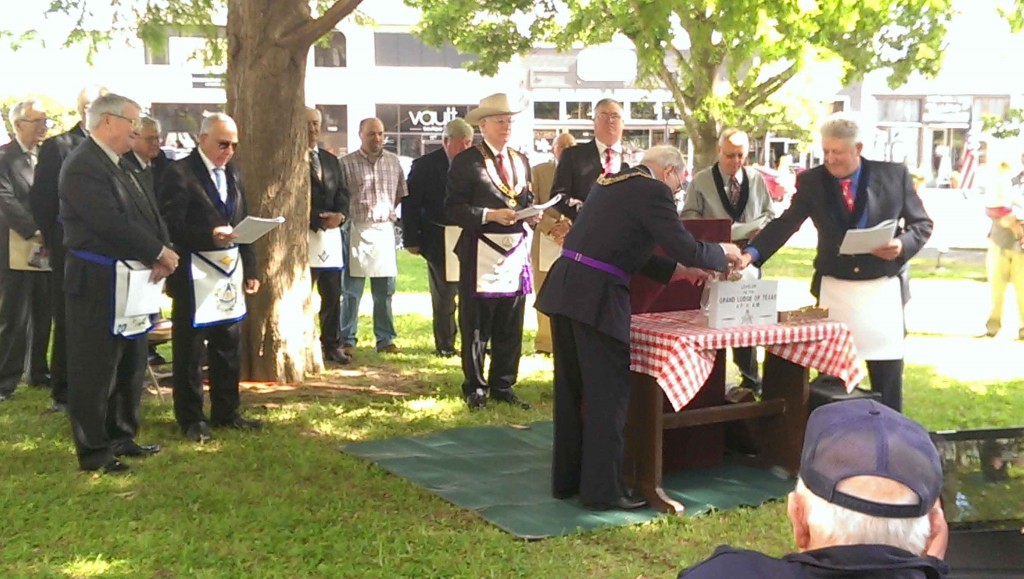 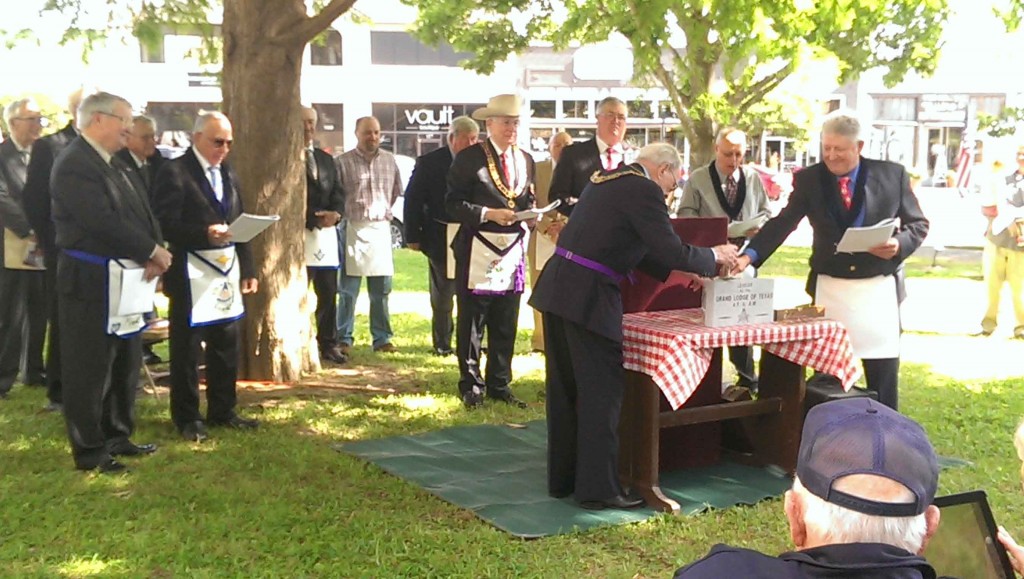 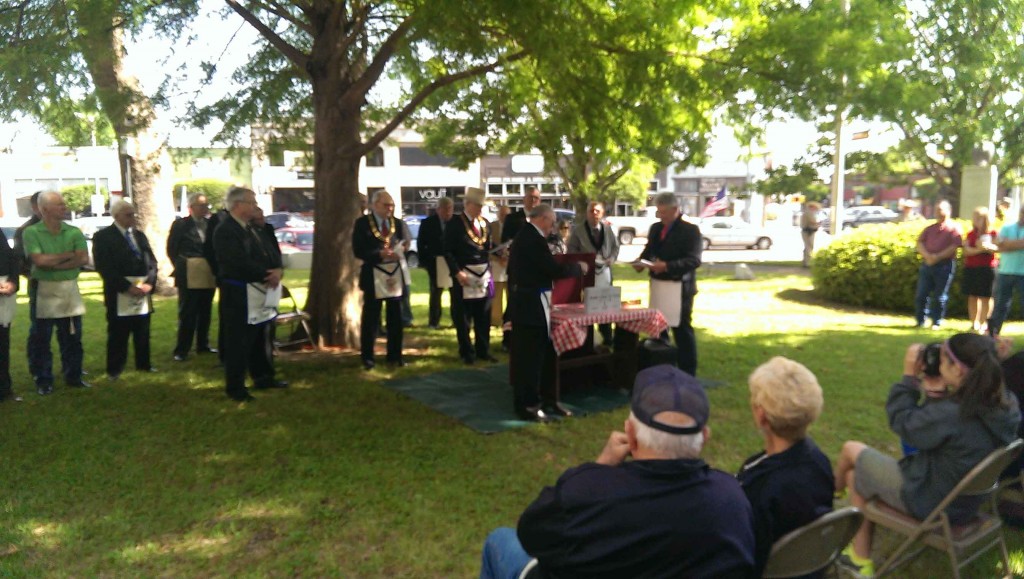 Hillcrest Masonic Lodge had many in attendance, as we are proud to support our Brother, Past Grand Master Elmer Murphey as he is a cornerstone of Hillcrest Lodge and extremely dedicated to the Fraternity.