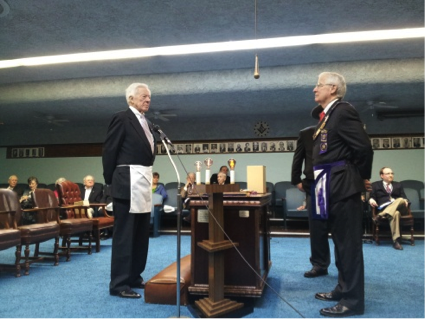 In Memorandum of Past Master Jack E. Williams

Brother Williams was in the institutional food business for many years and later retired as a real estate agent with Ebby Halliday Realtors. He was long active in the Dallas Chamber of Commerce and a past president of the Life Member’s Club in the Chamber. The Dallas Chamber of Commerce awarded Jack Life Membership Awards on nine separate occasions for his outstanding service to the chamber. In addition to being a Past Master of Hillcrest Lodge, he was also a member of Granbury Masonic Lodge No. 392 in Granbury, a 33rd degree Scottish Rite Mason, a member of Moslah Shrine Temple, a Past Worthy Patron of Love Field Chapter in the Eastern Star and a member of the Eastern Star Chapter in Granbury. He was Chairman of the Scottish Rite Speaker’s Bureau several years, Venerable Master of the Scottish Rite Bodies in Dallas in 1997, served on the National Shrine Hospital Committee for Endowments, Wills & Gifts for eighteen years and was Director Emeritus of the Shrine Hospital program for the State of Texas.

You can hear Jack talk a little bit about his time in Masonry and with Hillcrest Lodge from his acceptance speech of his 60 year service award, which starts at about 5:26 of this video

Jack was survived by his wife, Barbara Williams of Granbury; daughter, Jill Ward of Austin; and son, Jack E. Williams, Jr. of Austin