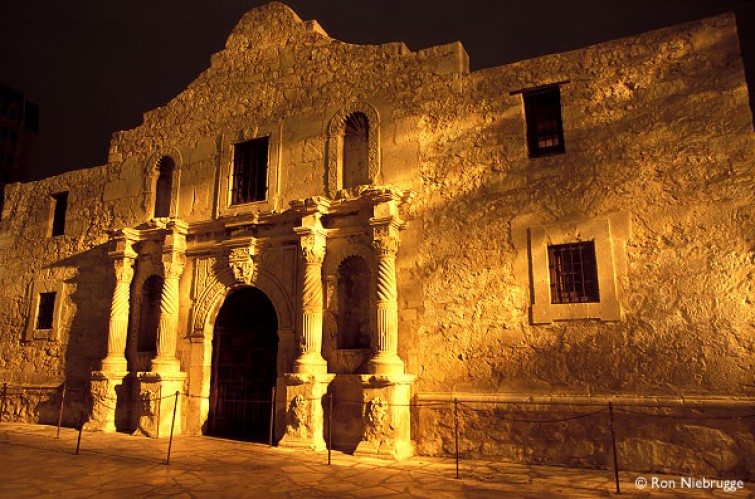 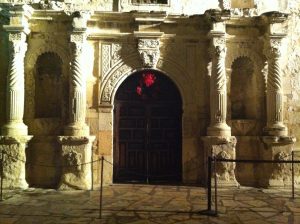 This month some of the Brethren from Hillcrest Masonic Lodge travelled down to visit with some of our brothers in San Antonio, and more specifically the Alamo Masonic Lodge.  Once a year, the brethren of Alamo Masonic Lodge are allowed by the city of San Antonio to hold a tiled (closed) lodge open only to master masons.  They use this as a special meeting to welcome the newly elected Grand Master of Texas. 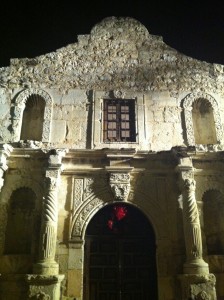 As the procession line approached the Alamo, you could hear the faint sounds of the bagpipes leading the line growing louder and louder.  The procession line revealed that this event was a very large turnout that included masons from many masonic lodges from all over Texas. 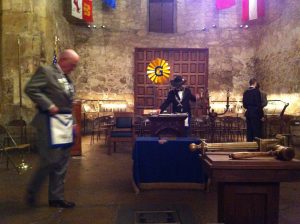 Prior to getting started the Worshipful Master of Alamo Lodge #44, Gregory D. Wright, prepares the lodge for opening and receiving of Grand Lodge officers.  He did a fantastic job considering he had to admit 36 District Deputy Grand Masters, 10 other Grand Lodge appointed officers, and the entire newly elected Grand Lodge Officers including Grand Master Walter Rogers.

The Alamo provides a History of Alamo Lodge No. 44 with this, “honored by a plaque on the south wall of the Long Barrack, (Alamo Lodge) was granted a charter from the Grand Lodge of Texas on January 15, 1848. The Master of the Lodge was Captain James H. Ralston, an Assistant Quartermaster of U.S. Volunteers. Born in Kentucky, Captain Ralston resided in Illinois at the time he received his commission, which he held from June 26, 1846 until March 3, 1849. Original members of the Lodge were mainly army officers who were already Masons. The Lodge held its meetings for several months in an upper-story room of the Long Barrack until it moved into its own hall on Alamo Plaza on June 24, 1848.” 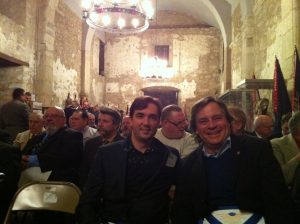 Here are a couple of the brothers from Hillcrest Masonic Lodge who decided to head down to attend the Master Masons meeting in the Alamo.  On the left is brother Kyle Wahlquist, and the right is Scott Brosi.  “it was very impressive” said Brother Brosi.  “When the brethren of the lodge spoke in unison, and their voices rang off of the old stone walls, it was humbling and comforting all at the same time” stated Brother Wahlquist. 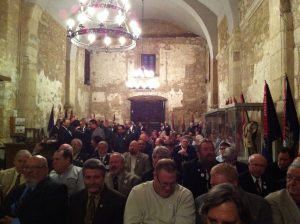 To give some context to Brother Wahlquist’s statement, this is an image of some of the brethren that turned out for Alamo Masonic Lodges Meeting.  It is estimated that the chapel held about 200 men that night.

For those that don’t know, according to the Alamo’s official website, there were 189 men who defended the Alamo against the Mexican army.  At least 6 of those men were Freemasons including James B. Bonham, James Bowie, David Crockett, Almeron Dickinson, and William B. Travis. 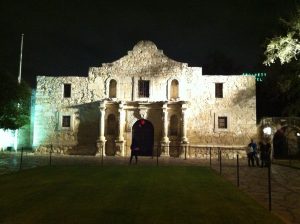