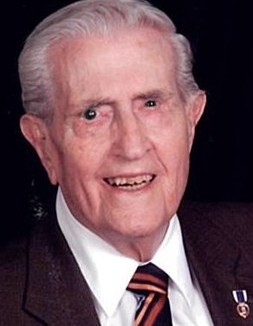 Brother Surry G. Shaffer, Jr., 89, of Hot Springs Village formerly of Dallas, Texas departed his earthy home on November 30, 2014 to join his parents, Surry, Sr. and Blanche Shaffer, his sister Elizabeth Shaffer Brumage in their Eternal Home with their Lord. He was a devoted husband to his wife Dorothy “Dori” for over 64 years and the proud father of four children.

After graduating from SMU, he entered the insurance business rising up into managerial positions in Insurance companies before starting and successfully operating his own Independent Insurance Agency for years before retiring to Hot Springs Village, Arkansas in 1994.

Brother Shaffer was devoted to his wife, family and church. He enjoyed comradeship with his hunting and fishing buddies, his fellow Masons and was a true patriot. Brother Shaffer served in the 45th Infantry Division in Europe during WWII, where he was awarded the Purple Heart, Bronze Star, Combat Infantryman Badge and two battle Stars.

After the war, Brother Shaffer petitioned Hillcrest Lodge where he was Initiated on November 8, 1949, Passed on January 17, 1950 and Raised on February 14, 1950. This year marked his 65th Masonic Service Anniversary.